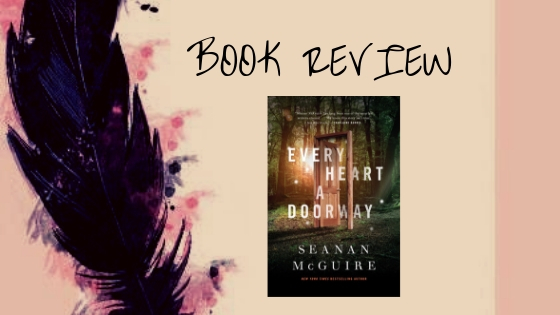 If you’ve spent your childhood wanting to be Alice, Dorothy or any of the Narnia siblings, then (a) You’ve wanted to escape your life really bad, and (b) you’ve probably noticed how these stories always just end once the children come back to the real world after their magical adventures to parallel universes. The narratives usually leave you feeling bittersweet and elegiac at the end; seldom, if ever, do they talk about what becomes of these children after they return to their real world. Every Heart a Doorway answers all these questions and deals with children’s feelings once they return.

. Now, I don’t know about the rest of you, but if I had been chosen to travel to a land of dancing skeletons and magical talking horses when I was 12, I would have been homesick for a good long time stuck between trying to convince my family of everything that I had seen and wanting to go back to the world which appreciated me instead of calling me “crazy.”

Portal fantasies are a uniquely immersive form of escapism – somewhere that children can go and feel like they ‘truly belong there.” A lot of times we see, in movies and literature, that these portals are presented to orphans to find a place where they can feel loved (hello, Narnia!) or to teenagers when they feel lost and misguided by the people around them (Wizards of Waverly Place should really make a comeback). Seanan Mc.Guire bends all these stories putting a fantastical, gothic twist to them transporting the readers to a land where the girl meets all the characters from Brother Grimm’s Fairy Tales.

The narrative of the book follows the life of a seventeen-year-old girl, Nancy Whitman, who like many others have returned to the real world after finding a portal that took her to the Halls of the Dead. She had gone missing for six ‘real’ months ─ seven weeks and six days in the magical world. To her parents, she was abducted and tortured which caused her to lose her sanity and talk about pomegranate groves, cool eternal twilight and the Lord of the Dead. To ‘fix’ her, she is sent to Eleanor West’s boarding school which conducts therapy sessions for children who have gone through trauma. Little do these parents know that the headmistress herself has been through magical portals and therefore understands the plight of their children. Her goal is to provide a place of acceptance and support for these teenagers and help them understand their situation better and move on.

It’s a fierce debut from a writer with seemingly boundless imagination.

The readers not only meet Nancy, but many others like her who have been through various different worlds; all travelling through different ways. Some had magical portals appearing from nowhere, a hidden spiral staircase in the attic (my personal favourite) and old, cracky mirrors. The worlds range from Dark Underworlds to Candy-Coloured Fairylands, each lying on a spectrum of a compass. The North, South, East, West has been replaced by High Nonsense, High Logic, High Virtue and High Wickedness. Each of the child is pulled into his/her world by things that they needed the most or things that were missing from their lives. But this is where things start to get complicated. Amidst differences and acceptances, a series of murders take place on campus, taking the lives of these children. The question is who is doing it and why? The boarding-school is a secret, so does that mean their secret is out? The author certainly doesn’t shy away from the dark, mystic elements of fantasy which is often at times overlooked in similar genre of books.

The best part is, that Seanan Mc.Guire uses fantasy and magical realism to make a subtle commentary on all the things that is wrong with our world. She takes the characters, weaves them into complicated worlds, puts a spin with her subtle commentary of gender stereotypes, bullying and acceptance – and out comes a carefully threaded story of diverse people from different traditions and cultures, all seemingly coming together with basic human traits: love, compassion and acceptance.

“Sumi had Nonsense in her heart, and so a door opened that would take her to a world where she could wear it proudly, not hide it away. That was her real story. Finding a place where she could be free. That’s your story, too, every one of you. You found freedom, if only for a moment, and when you lost it, you came here, hoping it could be found again.”

Despite the text being generally a character-centric prose, with the characters carrying the story forward, the exposition and imagery is hard to avoid. Mc.Guire makes sure that the readers are able to visualize the boarding-school, as Nancy enters the house and meets the Headmistress. The narrative is dreamy and movie-like, naturally flowing like a stream. I love a book with good imagery, and this was definitely one of them. 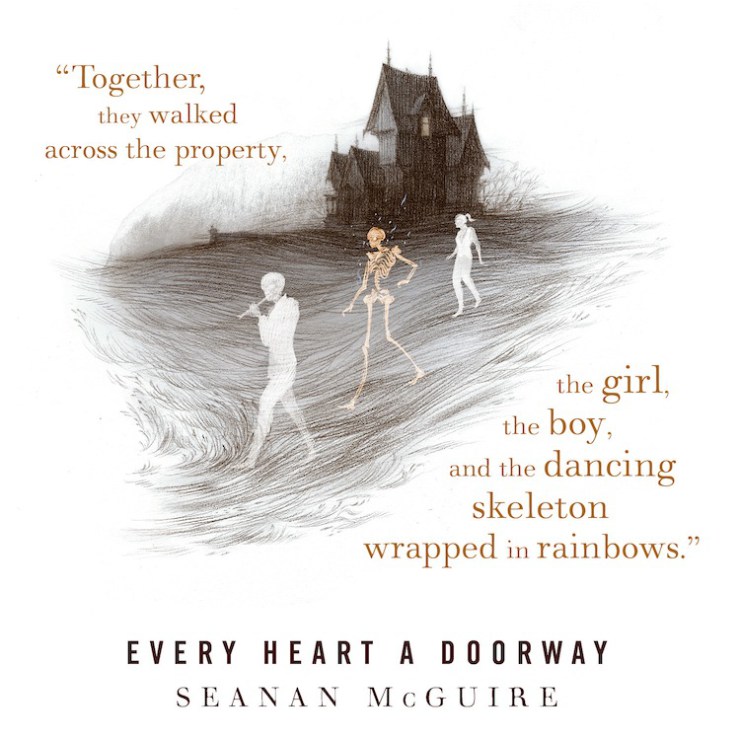 The dialogues on various places are witty and organic, lingering luxuriously on tiny, telling details — the fluttering of a curtain, the thundering of her heart in her chest and my personal favourite metaphor of all, the “girl with hair the colour of moonlight on wheat.” This description of something as simple as haircolour evokes a sensual, starry dusk-like image in the readers’ minds foreshadowing the elements of fantasy in the novel.

And while Every Heart A Doorway works beautifully as a fantasy fiction novel, there’s much more to it than that. It’s a brilliant critique of gender and cultural stereotypes and the “labels” people are identified with — the character of Kade comes across as a typical, good-looking boy in the book which might serve as a potential hero to the protagonist; Jack and Jill seem to be the perfect identical twins; Nancy serves to be the shy, reserved protagonist who saves the day — yet Mc.Guire very skillfully and subtly proves every assumption of the reader wrong by breaking every stereotype.

“Ever watch a pair of perfectionists try to decide which of their identical children is the ‘smart one’ versus the ‘pretty one’? Jill got to be the smart one, with expectations and standards she was supposed to live up to. I was the pretty one.” Jack’s smile was quick, lopsided, and wry. “If we both asked for Lego, she got scientists and dinosaurs, and I got a flower shop. If we both asked for shoes, she got sneakers, and I got ballet flats. My hair was easier to brush and one day when we were toddlers Jill’s hair got stuck in the brush and bam, the roles were set. We couldn’t get away from them.”

I love a book with good, diverse characters. However, I feel like a lot of authors just feature an Asian character, a black or a gay character to fulfill the “diversity quota” for books, without giving any thought or development to those characters. Nevertheless, in this book, it felt like the author did justice to the diversity element. Kade was a transgender, and his character became much more interesting because of this, as it formed his experience in the world he went to – it created meaning for his story arc. Nancy was an asexual and the author also took care in outlining the difference between being asexual and aromantic. Jack and Jill went to worlds which demanded them to be who they wanted to be, rather than the roles that they had been confined to, in the real world. Where Jack was ‘supposed’ to be the pretty one in the real world, she got to be the brainy scientist in her magical world. I felt like this was the entire premise of the story: to love and be loved; to accept others the way they are and find a place where you truly “belong.”

“For us, places we went were home. We didn’t care if they were good or evil or neutral or what. We cared about the fact that for the first time, we didn’t have to pretend to be something we weren’t. We just got to be. That made all the difference in the world.”

Seanan Mc.Guire exhibits an admirable restraint throughout the novel, never giving in to tired clichés or overwrought scenarios. Reading this book brought back all my childhood desires, making me want to go to Hogwarts, Narnia and the Land of Oz. It is a stunning, audacious book with a refreshing take on fiction fantasy, combining both sweet and dark elements. Coupled with atmospheric imagery, well-developed characters and mystic world-building – this novella should be a must-read for everyone! 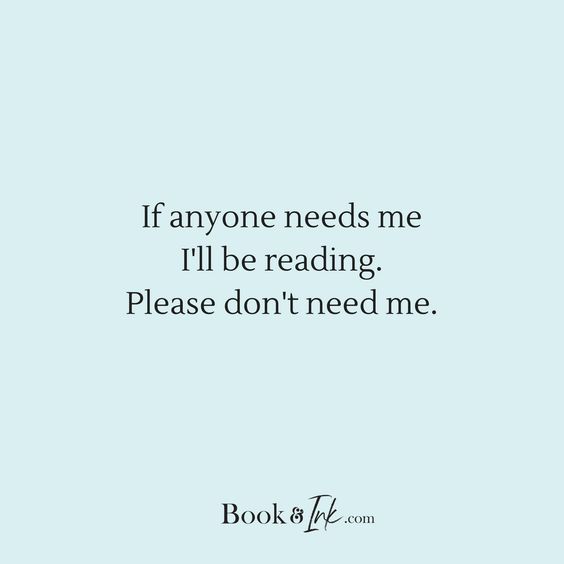